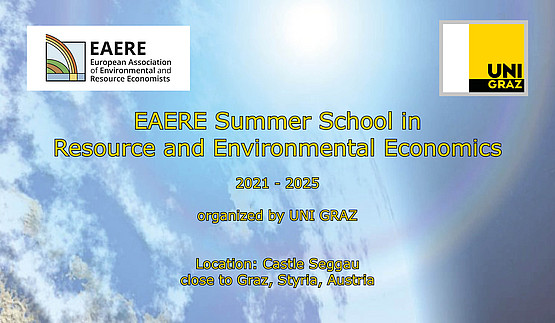 The EAERE summer school will be hosted by two departments at the University of Graz, which reflects the strong cross-disciplinary and environmental focus in a vibrant scientific environment.

The University of Graz, which was founded in 1585, is Austria's second oldest university and one of the largest in the country. With 31,000 students and 4,300 employees, the University of Graz contributes significantly to the vibrating life of the Styrian capital. Its location in the heart of Europe encourages a lively scientific, economic and cultural exchange with South-East Europe. The University of Graz has identified five Fields of Excellence where researchers are linking across the traditional faculty boundaries. One field of excellence is Climate Change Graz, in which a team of over a hundred researchers is exploring which economic, production engineering, social, political and legislative changes are needed to make an almost emission-free and climate-stable economy and society possible. The Economics Department as well as the Wegener Center are actively taking part in this large research network.

The Wegener Center for Climate and Global Change is an interdisciplinary and internationally oriented institute of the University of Graz with around 60 researchers. It combines the research competencies of the University of Graz in the fields of climate, environmental and global change. It has a strong national and international research network. The research interests of the Wegener Center cover monitoring, analysis, modelling and prediction of climate and environmental change, and the social and economic analysis of these changes. The Economics of Climate and Environmental Change Research Group focuses on the options individuals and society have to mitigate, as well to adapt to, climate and environmental change. Researchers at the Wegener Center lead or are active in numerous international, e.g., EU Horizon 2020, and national projects. Besides research output, the Wegener Center hosts a Doctoral School on Climate Change: Uncertainties, Thresholds, and Coping Strategies, established by the Austrian Science Fund (FWF), with more than 20 PhD students.

The Economics Department at the University of Graz comprises 6 research groups ranging from empirical assessment of asset markets to innovation, diffusion and transformation processes to individual and collective choice as well as environmental and resource economics. The Faculty is active in various international research collaborations such as with Eurostat, OECD and the World Bank, holds several editorial positions (such as European Review of the History of Economic Thought and Environmental and Resource Economics), is characterized by high incoming and outgoing mobility (such as the Joseph Schumpeter Fellow at Harvard University) and has organized several conferences (such as the 2008 Conference of the German Economic Association with more than 500 participants). Closely linked to the Department are, besides the Wegener Center for Climate and Global Change, the Graz Schumpeter Centre and the Graz Schumpeter Society with their much-noted Graz Schumpeter Lectures with lecturers such as Sir Anthony Atkinson (2012), Paul De Grauwe (2015), and Larry Samuelson (2019). Most of the lectures are also published in a series by Routledge (https://www.routledge.com/The-Graz-Schumpeter-Lectures/book-series/SE0392). The Graz Schumpeter Centre regularly organizes the Economic Policy Forum on current topics such as the banking and finance crisis, tax reform, and social policy, as well as a bi-annual summer school.

The EAERE summer school will be hosted at Castle Seggau in Styria, which can be reached with an approximated one-hour bus or train ride from Graz. The castle dates back to the 12th century and served as the seat of the Styrian Bishopric until 1786 and carried on to serve as summer residence of its Bishops until the mid-20th century. It offers a unique environment, surrounded by its own meadows and woodland. Today, the castle serves mainly as a convention center open to the general public. Its refurbishment fuses modern design and architecture with a mediaeval setting. This extraordinary venue enables to have a summer school in a close, intimate and stimulating environment: lectures and accommodation are in one place which facilitates informal communication between lecturers and students, as there are various possibilities of casual contact not only during lectures or coffee breaks, but all day long. Moreover, spending several days in a somewhat remote place makes thorough engagement with the topic at hand possible, as there are fewer distractions. The location offers the possibilities for short walks and longer hikes. We will offer excursions and social events during the summer school week free of charge.

Graz is the capital of the Austrian province Styria and with a population of around 320,000 is the second-largest city in Austria after Vienna. Graz has a long tradition as seat of universities: its six universities have almost 60,000 students. This makes Graz a vibrant and young city. Further, its historic center is one of the best-preserved city centers in Central Europe and offers numerous cultural sights to explore. Graz is easily accessible by different modes of transportation – it is a 2 ½ hour train ride to Vienna and Vienna airport and Graz has its own airport as well. Graz is also reachable by many night trains for those coming to Graz from further away. Finally, the city offers a wide selection of hotels and restaurants for low to high budget travelers.

Students who wish to stay for a research visit before or after the school are welcome to stay either at the Wegener Center or the Department of Economics. The summer school will be logistically supported by the secretariat of the Economics Department.

Due to COVID-19 forecasts, the School has been postponed and will take place from September 26th to October 2nd 2021 in Castle Seggau, close to Graz,…

We are pleased to announce the EAERE and UNI Graz European Summer School in Resource and Environmental Economics.